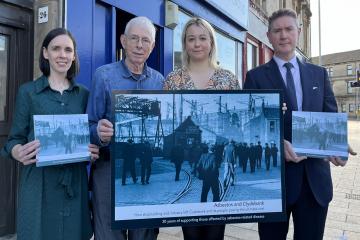 Victims of asbestos are to have their personal stories told in a landmark new book.

Asbestos and Clydebank is a 44-page book on the history of asbestos as well as the devastating impact that asbestos-related diseases have had on the community.

It was developed by Clydebank Asbestos Group (CAG), who have helped people over the years and launched the book to mark their 30th anniversary and highlight the real lives that have been affected.

Jimmy McFarlane, 83, from Bowling, developed pleural plaques after being exposed to asbestos while working as a heating engineer.

He said: “Like the majority of people I never knew about CAG but I was always worried about knowing what to do and I don’t want anyone else to feel lost.

“Asbestos needs to be removed. It’s a secret killer and has to be dealt with to stop people being poisoned and that’s why it was important to take part in this book and get the message out there.”

While former shipbuilders or tradesmen could develop conditions after inhaling toxic fibres at work, others have no idea how they became ill.

Despite having no direct contact with asbestos, Laura Evans was diagnosed with mesothelioma, a cancer linked with asbestos exposure which affects the lining of organs.

The 32-year-old is one of the youngest patients for this condition in Scotland.

She said: “It sounds morbid, but the reality is when I die I want to know my story is there so that more people will take notice.

“I actually hope people are a little shocked when they read this book because what happened is shocking. Cancer is not something that goes away. You’re always affected by it and so are the people around you.

“I really hope that asbestos is removed from all public buildings and homes. There’s no asbestos that’s safe so leaving it alone is not an option.”

Professor Andrew Waterson, an occupational health and safety expert, echoed the need for real testimonies to be heard, saying: “It’s the lost voices that need to be captured.

“Speaking to real people brings a new dimension to things as that’s where you find where the significance is as it’s probably been neglected.”

The team at CAG are hoping the book will raise awareness of the need to improve health and social care in the future, particularly in the West Dunbartonshire area.

Rachel Gallagher, CAG coordinator, said: “We are incredibly humbled by the strength, dignity and passion shown by each person who chose to share their experiences in Asbestos and Clydebank.

“West Dunbartonshire has frequently topped national tables for asbestos disease, undoubtedly due to past shipbuilding and heavy industry, but it affects all of Scotland.

“For 30 years we have fought for truth and justice but the truth is CAG is needed just as much today as it was in the early 1990s.

“Asbestos use may have been banned in 1999 but it is still in our communities – in the buildings and in asbestos diseases which contributes to a devastating heritage.

“We therefore hope the relevant stakeholders who read the real stories of real people may consider a more strategic and joined up approach to protect future generations.”

The book was developed with solicitors Digby Brown, which has supported people with asbestos legal actions and communities via fundraising efforts.

Fraser Simpson, head of the firm’s industrial disease team, said: “The work of CAG is hugely important from decades of campaigning work, which is recognised in the book, to the free holistic daily support it provides for hundreds of families.

“The vision for the book was commendable because it rightly – and finally – places the spotlight on real people and their communities to give them recognition they deserve so we were passionate in providing support to turn this vision into a reality.

“Asbestos and Clydebank therefore is not just interesting or informative reading material – it is a vital social document that I hope will be a catalyst for positive action to improve the future.”

Be the first to comment on "Asbestos and Clydebank: Stories of ‘secret killer’ to be told in new book"