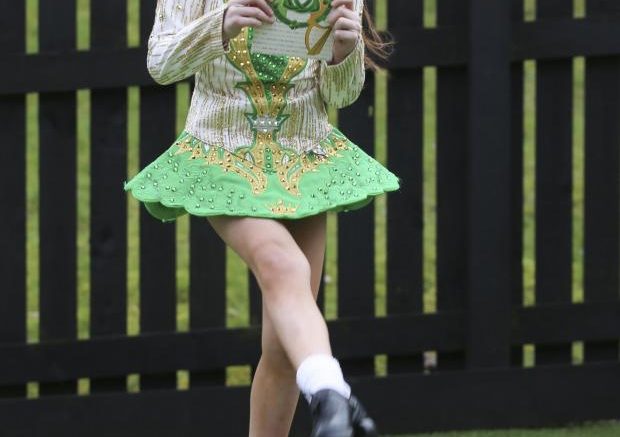 Meet the eight-year-old multi-award-winning Irish dancer who is quite literally dancing to her own tune.

Zara Gibb, from Bearsden, has been dancing competitively since the age of four and has a house full of trophies to prove her talent.

But her passion means that she is continually trying to achieve more, and during lockdown she decided to take on a new challenge.

She said: “I wanted to learn to play Irish tunes so I can dance to them. I was mostly doing home learning and dancing in my kitchen, but I wanted to do something else.”

Zara chose to learn the keyboard, which is traditionally performed live at her competitions, and after starting lessons over Zoom she made a special request to her teacher.

She said: “I asked to learn the St Patrick’s Day Traditional Set Dance as it’s my favourite.”

The dance holds a special meaning for Zara, as it is one of the most popular routines and has remained timeless over the years.

She has danced the St Patrick’s Day dance with her 84-year-old grandmother, who also used to dance competitively.

Zara’s mum Pauline said: “The dance is recognised worldwide and her gran who is 75 years older can still dance to it.  Zara is so passionate about dancing and playing music.

“We totally admire her learning to play via Zoom considering how difficult the past two years have been for little ones.”

Zara has now recorded her own performance of the song so that she can play it back and dance along.

Pauline is so proud of her daughter’s determination to keep herself motivated and pick up the new skill so quickly.

She said: “It’s so unusual for an eight-year-old to pick it up like this. I don’t know how she does it, the chords are so hard.

“She’s playing with both hands, and she takes to the lessons with such maturity.

“She’s never had a real-life teacher; it’s all been online with a teacher in London. This has been a positive thing about lockdown.”

Since discovering her new talent, Zara is not stopping and has set herself goals of what to learn next.

She said: “I want to learn a Job of Journey Work and a Riverdance on keyboard.”

Pauline added: “She is just so passionate. She works really hard and has become so successful with dancing.

“She already learned to dance Job to Journey Work and she would love to dance in the Riverdance show one day.”

Be the first to comment on "Bearsden Irish dancing champion, 8, learns to play her dances on keyboard"

One of Glasgow’s most respected art galleries celebrated its 30th anniversary with a new exhibition and a new location. Glasgow Times | What’s On Glasgow …

FOR HIS forthcoming role in epic adventure series Outlander, Kevin Lennon has to sport what can only be described as a magnificent, massive moustache. Glasgow Times | What’s On Glasgow …

Here is everything you need to know about ITV’s new crime thriller filmed in Glasgow. Glasgow Times | What’s On Glasgow …