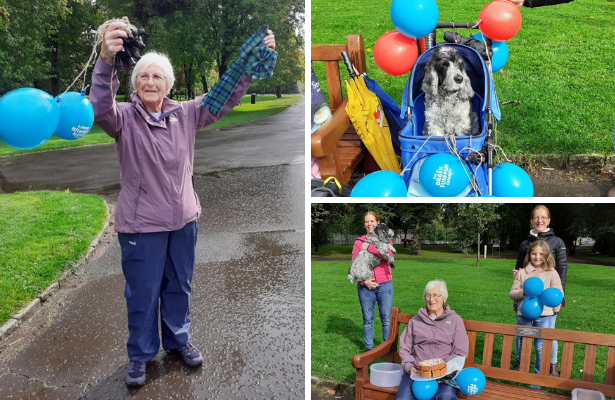 A DETERMINED gran walked more than six miles in the pouring rain in memory of two family members who died with brain tumours.

Irene Thomson, 88, has raised more than £700 for The Brain Tumour Charity after completing this year’s Kiltwalk.

The annual event was held virtually over the weekend.

The pensioner walked from her home in Broomhill to Victoria Park, where she completed two laps of the park, before walking home again on Friday and Saturday.

Irene said: “It was pouring with rain so to say I enjoyed it would be kidding myself, but I was determined to finish, and I had my waterproofs and suitable shoes on.

“It was a bit strange doing it solo because usually there are supporters on the side-line cheering you on and that does make a difference.

“So, it was a bit weird there was no encouragement, but my family came and saw me off and on Saturday we went out for a nice meal afterwards.”

Irene, who has taken part in the Kiltwalk four times before, completed this year’s in honour of her sister Anita Agnew and sister-in-law Gill Townsend, who both died of brain tumours within weeks of each other.

Irene added: “I’m very pleased with the amount raised and I would like to thank everyone who sponsored me.”