THE daughter of an elderly woman who died in a care home after contracting Covid-19 believes staff absence rates led to her mother’s neglect.

Louise McKechnie says she found the frail OAP lying soiled and wet in a dirty room with an open bag of used PPE in her bathroom.

Bridget Snakenburg had been at Whitehills Care Home in East Kilbride for four years when she contracted Covid and then died four days after suffering a stroke.

Louise says on the day her mother died she cleaned her mouth and found old food that she had to “break off from her cheek”.

A BBC documentary due to be aired tonight has found that almost 180 warnings were raised by care homes about staffing levels during lockdown and managers felt pressure to accept hospital transfers before mass testing was introduced.

Homes were required to alert the Care Inspectorate to shortages at the height of the Covid-19 crisis from April 3 to June 17, when there were around 2400 more deaths in care homes than would normally be expected for that period.

Figures show, a total of 30 red warnings were issued, which means there is insufficient number of staff to properly meet residents’ needs, while 149 were amber, which means levels are close to impacting on the quality of care.

Ms McKechnie, who works in the care sector, said: “She’d been in her bed for a long time, and her room hadn’t been touched for a long time. The debris had built up. I’ve never seen a room like that.

“There weren’t enough staff to care for their needs.

“She should not have been left in the first place to die like that.”

The figures were obtained through Freedom of Information requests for BBC Disclosure Scotland.

The programme reports that in the big push to clear hospital beds, many patients were moved into care homes without being tested.

Reporter Mark Daly asks: “Is it your understanding that care homes were under pressure to accept discharges from hospital?”

Dr Macaskill replies: “I think there was a degree of pressure exercised on care homes to make themselves available to relieve the NHS at a point at which there was a risk.”

The programme reports that by May 1, more than half of all Scottish care homes had coronavirus within them and hundreds of residents were dead or dying.

It was at this point that mass testing for residents and staff was announced.
Infectious disease scientist Babak Javid says he sounded the alarm about care home staff not wearing masks.

Mr Javid said: “There is an awful lot of evidence that was available by March that made on the balance of probabilities, that masks are going to be helpful.”

At the end of June, the Scottish Government changed the guidance and mask wearing was made compulsory for health and social care workers.

In a statement, the Scottish Government said: “This is the biggest public health crisis we have faced in our lifetimes and the impact of care homes around the world has been profound. It is right and proper that decisions taken during this process face scrutiny in the fullness of time but we are committed to protecting life and protecting people from this virus, and all our efforts are going towards doing everything we can to mitigate the impact of Covid-19 in Scotland.

“On June 29, the extension for mask wearing was made for all health care workers delivering direct patient care at all times during their shift. “

A spokesperson for Whitehills Care Home said: ‘We have apologised to Mrs Snakenburg’s family for failing to quickly remove used PPE from her room during the Covid crisis.

“Our infection control procedures have since been fully reviewed and endorsed by the Care Inspectorate, which has praised our high standards of hygiene.”

Disclosure: The Care Home Scandal will be shown on BBC One Scotland tonight at 10.45pm and afterwards on BBC iPlayer. 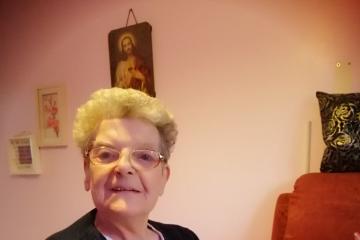