It wouldn’t be Christmas Day on ITV without Birds Of A Feather, and this one-off special episode features guest stars Les Dennis and Ami Metcalf. Dennis plays Dorien’s love interest, Graeme, while Metcalf joins as Jordan.

The new cast members, plus familiar faces Linda Robson (Tracey Stubbs) and Lesley Joseph (Dorien Green), tell us what’s in store for their characters this festive period, and discuss the sitcom’s long-lasting success. 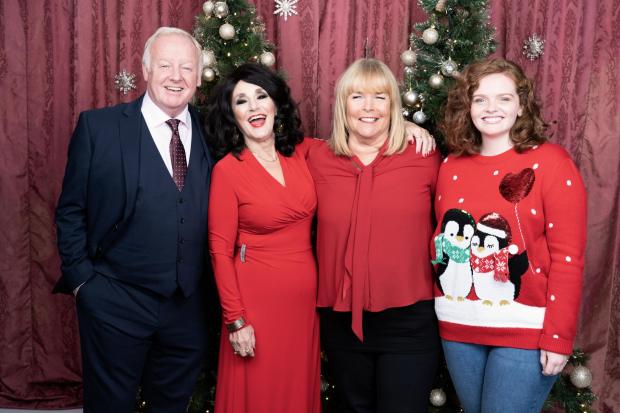 Les Dennis – What can you tell us about your character, Graeme?

He’s very charming … or is he? He’s a dentist, a Harley Street dentist. He and Dorien met online, he’s very upper class, quite dandy-ish. He was fun to play. Different to me.

Graeme arrives with a matching face mask to his tie and pocket handkerchief. That’s how co-ordinated and dandy he is.

– Have you always been a fan of Birds Of A Feather?

I’ve always been a fan. I’ve always loved (Laurence) Marks’ and (Maurice) Gran’s writing. I was a big fan of Shine On Harvey Moon and The New Statesman, all of those shows they wrote. Birds is the longest-running and the characters are great.

She was great. She’s a lovely woman. I’d met her a couple of times on Loose Women. It was lovely to spend some time with her, she’s really nice. And young Ami Metcalf, the new addition to the show, she’s very good as well.”

– What’s normally on your Christmas viewing menu? Do you watch any comedies?

I do. Gavin & Stacey was great last year, Only Fools And Horses and all those shows. When Russ Abbot was doing TV, we always had a Christmas show. It’s nice to be part of that Christmas schedule again. I love the big Agatha Christie shows – the glossy, really lovely dramas.

And it’s the first one for a few years for Birds Of A Feather. The repeats were so popular during lockdown. I think that’s what appeals. Right now, we want comfort telly. We really want to switch off and be entertained – away from the news and everything that’s going on.” 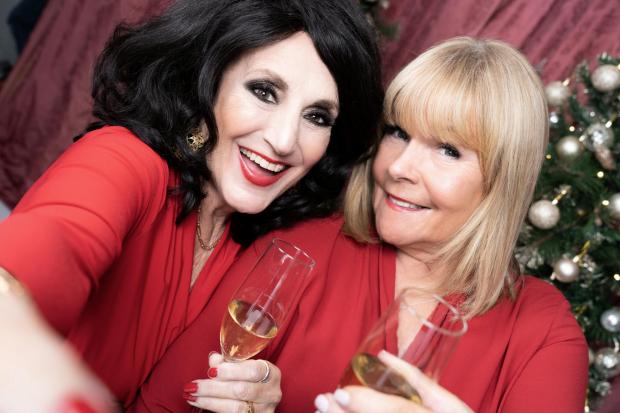 Linda Robson – What can you tell us about the Christmas special?

It’s been three years since viewers last saw the Birds and Dorien now owns the house after Tracey sold it to her. Viewers will remember that Tracey took the rap for the boys and the dodgy cigarettes and ended up in jail!

Whilst Tracey was in jail she was befriended by a young streetwise girl called Jordan (played by guest star Ami Metcalf). Tracey eventually asks Jordan to move in with her and Dor.

With Dorien now the owner of the house, the dynamics have shifted and it’s hilarious, it’s very ‘war of the roses’ between the pair of them.

Dorien’s met a man online called Graeme (played by guest star Les Dennis). Tracey’s not a fan of him from the outset and thinks he’s trouble and she’ll be proven right too – he’s a right wrong ‘un!

I always watch the Queen’s Speech on TV, that’s a Christmas tradition. As a family we enjoy playing games – I really like Articulate but I get very competitive, I do enjoy winning!

Lesley Joseph – What will the Christmas special have in store for Dorien?

She now owns the house and she and Tracey are driving each other mad!

Dorien has discovered Zoom during lockdown and is enjoying talking to men online. She meets Graeme, a top Harley Street dentist – he ticks all the right boxes for her. She decides to invite him for dinner at the house, much to Tracey’s dismay, because he’s not part of their bubble.

I’ve known Les for years, he fitted in really well. Graeme is a great character and Les is a wonderful actor.

Les and I have a scene together playing Jenga and it’s absolutely hilarious, viewers will love it.

– Do you ever watch the ITV repeats?

I actually watched some of the Birds Of A Feather repeats on ITV, which I never do because I’m too self-critical. I must have only seen half of all the episodes we’ve ever made. I actually really enjoyed the episodes, they were really good.

I adore making Birds Of A Feather; one of my happiest memories was the first Christmas special we did way back in 1989, which was all about a Christmas cruise.

Ami Metcalf – What can you tell viewers about your character, Jordan?

Jordan is in prison and that’s where she met Tracey – they were cell mates.

Viewers first meet Jordan when Tracey comes to visit her and throughout the episode you get an insight into their friendship.

Jordan looked after Tracey in prison and they got quite close and so they’re really pally – it’s a great dynamic!

– What does the Christmas Special hold?

You can expect lots of laughs! Of course there’s references to corona, but it I think it will be lovely to watch around Christmas time and will give people that Christmas feeling – a bit of familiarity and some laughter is what everyone needs at the moment!

– How have you found joining the cast?

Filming it was great. It was obviously a bit different to normal, but it was so lovely to work with everyone and we had a brilliant time.

I was a little bit nervous beforehand because everyone’s known each other for years, but they were all so kind and welcoming.

It was great working with Linda, Lesley and Les – they’re all just amazing and so entertaining to watch as well. I would watch the scenes I wasn’t in and they’re so funny! Just hilarious.

– The Birds Of A Feather Christmas Special airs on Christmas Eve at 9.15pm on ITV.

Cinemas around the country have sat empty for much of 2020 but that could be set to change in 2021, with a slew of blockbusters waiting in the wings as soon as we can return to multiplexes. Glasgow Times | What’s On Glasgow …

We all have at least one moment from our teenage years that makes us wince it’s so embarrassing. Glasgow Times | What’s On Glasgow …

The festival had planned a hybrid approach, screening films at the Glasgow Film Theatre and at 23 partner cinemas across the UK. Glasgow Times | What’s On Glasgow …