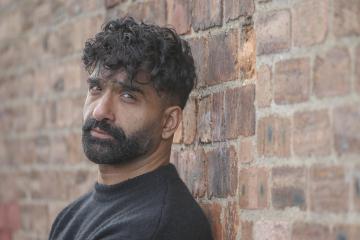 TO THE wide-eyed, six-year-old Taqi Nazeer, the tale of a young girl from his father’s village who became possessed by ghosts was his introduction to a lifelong fascination with horror.

“I love horror films,” grins the actor and writer, who recently appeared in TV dramas Shetland and The Control Room and will soon be seen in new ITV thriller Six Four, playing a counter terrorism officer.

“I was practically traumatised growing up, with my brothers and uncle introducing me to The Exorcist and Nightmare on Elm Street from a young age – but I loved those movies and have definitely developed a high tolerance for horror and jump scares as a result.”

He laughs: “My mother used to tell me stories of the jinns – which are ghosts, made of smokeless fire, in Islamic theology – to get me to sleep at night.

“Does that sound cruel? It wasn’t – jinns can be good or evil. But for this story, I wanted an evil one….”

Taqi’s play Jinnistan – which means, literally, “land of the ghosts” – is next week’s A Play A Pie and A Pint at Oran Mor. Fittingly, this eerie tale opens on Halloween.

It is the story of Asiya, who returns early from a school trip. Her parents, Malik and Layla, are not surprised – after all, their teenage daughter is struggling to fit in and wants nothing more than to return home to her familiar Scotland.

But when Asiya starts showing signs of paranormal behaviour, Malik has no choice but to reveal his family’s secret, and the couple have to band together to save their daughter and protect the town from an unknown entity.

However, it seems there could be something far more sinister at work…

“When I was writing Jinnistan, I was thinking – how can I tell a horror story?” says Taqi. “What is my South Asian take on these films from the 70s and 80s?

“Because good versus evil is a universal theme, of course. I wanted to tell a scary story, with reference to these films I loved – so there is comedy in there too, as well as horror.”

He pauses. “And it is actually quite scary,” he adds. “Horror is fascinating. As people we are scared of the unknown, but it is in facing the darkness that we overcome our challenges.

“I think that’s why horror films are so popular – we like the journey, we want to see good fight evil and win.”

READ MORE: ‘It was an amazing moment’: Glasgow actor and Doctor Who geek on working with David Tennant

The terrifying play, directed by Niloo-Far Khan and starring Taqi as Malik, Avita Jay as Layla and Iman Akhtar as Asiya, is Taqi’s second for the Oran Mor lunchtime series. His first, Rishta, is now under development with an awardwinning London theatre company.

“I love PPP, it’s such a visceral experience,” he says. “The audience know what they want, you have a minimum budget and two weeks to put on a play, so it’s hectic. But you have this amazing team whose only focus is putting on this play, and it’s fantastic.

“I don’t just want to entertain people I want to educate them, it’s about bringing them into a world that isn’t so different from their own.”

He adds, in exasperation: “We are all of us always being ‘othered’ at the moment, whether it’s race or colour or creed, and that’s absolutely to do with the political landscape we are facing in Britain today. We’re being pitted against each other, and why?

“I was lucky growing up, I didn’t encounter much racism – the odd shout on the street, maybe and one boy at school said something to me once, but I lamped him and he never said it again, and we became friends. I know that’s not other people’s experience. But since Brexit you can see it, you can feel it in this country. Racism has become more covert, but it is there.”

He adds: “What PPP does, what artistic director Jemima Levick does, is say – forget all that. Tell the story you want to tell, and people will come.”

Rishta, Taqi’s first play, was about an Asian arranged marriage.

He laughs: “What amazed me was that after it, so many older women, white, Scottish, Catholic and Protestant women, came up to me to say, ‘that happened to me, by the way, that’s not just an Asian story’.

“I had more white Scots than South Asian Scots telling me they really connected to that play. That’s what I’m hoping to do with Jinnistan – connect with people.”

He breaks off, adding with a laugh: “I want to scare them, first of all, and make them jump – but ultimately I want to connect with them and their lives, in a story about family and good versus evil.”

READ MORE: ‘I’ve had fan mail before but Doctor Who was off the scale’: Jonathan Watson is back on stage in Glasgow

Taqi grew up in Edinburgh’s west end and while he says he was “surrounded by the arts”, he opted to study business and marketing first.

“I was the only person in my business school to land a job with Goldman Sachs,” he says. “But I grew up in a creative family – so I think it was always in there and when I did move away from business into the arts it felt like a natural thing, and something much more fulfilling for me.”

He adds: “It means I have other strings to my bow, I suppose. Unless you are the one percent and make it big, I think that’s a good idea. The arts can be jaggy, intermittent. One minute you are in work and the next you are not. Then something like Covid comes along and wipes everything out.

“And going to university first helped me when I did get to drama school, it helped me see things in a different way.”

Taqi says he “owes everything” to his mum, Rasul.

“She is my constant adviser, she pushes me and listens to me, always,” he says. “I grew up listening to the stories she told me, and my drive to tell stories now definitely comes from her.”

Working on TV shows such as The Control Room and Shetland was a “wonderful experience”, says Taqi, whose career until recently has mostly been spent on the stage.

“Television requires a very different set of skills, it’s very new to me,” he explains. “I’m a funny being. I have to make sure the roles I’m offered are right for me – doesn’t matter how big it is or how much money it brings.

“It is certainly a matter of frustration for my agent. But if I’m not passionate about it, I can’t do it. I want to always live by my choices.”

Next on the horizon for Taqi is the Edinburgh Lyceum’s A Christmas Carol.

“I’m playing a headless ghost,” he says, cheerfully. “Ghosts seem to be following me around at the moment….”

Jinnistan is at Oran Mor from Monday, October 31, until Saturday, November 5.

Be the first to comment on "‘I want to scare people’: Shetland actor on his eerie Glasgow play for Halloween"