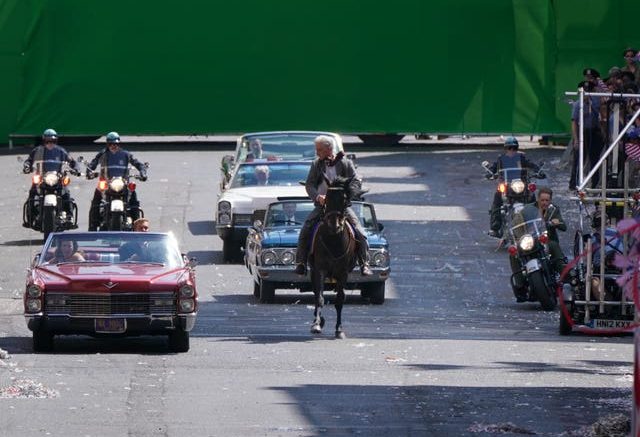 Filming for the new Indiana Jones film has continued in Glasgow on Saturday, with an elaborate chase scene taking place through the city streets.

Body doubles for actors Harrison Ford and Boyd Holbrook – with the Star Wars actor’s lookalike on horseback and his co-star’s double on a motorbike – were seen on St Vincent Street as the takeover of the city centre continues.

For almost two weeks, businesses in the area have been adorned with facade’s mimicking a late-60s American city, complete with flags hanging from buildings.

The cast and crew are filming the as-yet untitled fifth instalment of the hit film series, the first since the 2008 release of Indiana Jones And The Kingdom of the Crystal Skull.

The scene appears to show a chase during a parade celebrating the Apollo 11 astronauts, with banners welcoming Neil Armstrong, Buzz Aldrin and Michael Collins back from the first successful mission to the moon in 1969.

Body doubles for the actors could be seen flanked by classic cars and police outriders as they filmed the scene, with a green screen background in the distance.

In another part of the scene, cheerleaders could be seen leading the parade, as well as an actress wearing a flowing dress, tiara and sash which dubbed her “Miss Manhattan”.

Phoebe Waller-Bridge, star of Fleabag and Solo: A Star Wars Story, was pictured on set on Wednesday at Cochrane Street.

The movie is being directed by James Mangold.

Parts of the city centre will be closed on various days until July 31 for filming, with the “prohibition of pedestrian movements during ‘action’” in some cases.

Vehicles will not be able to wait, load or unload – or even move – on other dates along St Vincent Street, Hope Street, West Nile Street and Wellington Street, among others.

Filming will move along to the Trongate, Montrose Street, Bothwell Street and Blythswood Street as the month goes on.

Vehicles will not be allowed to move along the M8 Kingston Bridge off-ramp to Bothwell Street from 8pm to 10pm between July 26 and 28.

Be the first to comment on "In Pictures: Indiana Jones filming continues in Glasgow city centre"