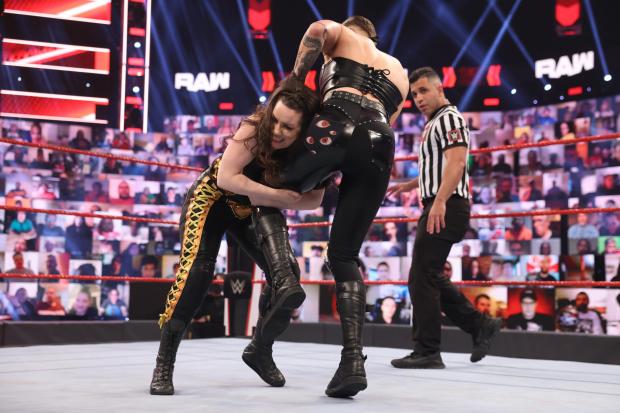 She is a pint-sized Glaswegian in a land of giants.

But Nikki Glencross hopes to walk into this weekend’s SummerSlam pay-per-view as WWE RAW Women’s champion and walk out with the title still around her waist.

Competing as Nikki A.S.H (Almost a Super Hero), the Scot won the big one at last month’s Money in the Bank PPV which is considered the best show of the year so far. She then won the title the following evening on Monday Night RAW and has not had time to look back.

Not that she would. Glencross, 32, is only focused on what’s next as she continues to gain momentum in a company known for its loud personalities and humungous, muscle-bound superstars. “I’m not sure if it’s sunk in yet, I feel on cloud nine and I’m over the moon,” she told the Glasgow Times. “But at the same time I’m ready for this responsibility, to represent the company and the women’s division, so I’m ready for all the challenges and I’m excited. It’s going to be an incredible journey and we’re only in the early stages.

“I feel I’ve been working towards this since I was 18-years-old. I take the responsibility very seriously and I can’t wait. We have SummerSlam next and I’m just ready to go, now we buckle up.”

The company’s biggest event of the summer is this weekend and Nikki could not be more buzzing. UK fans – especially now the Scottish contingent – have always had to watch live in the early hours of the morning thanks to the show being broadcast live on US time.

But Nikki’s reign as champ has given us Scots a reason to tune in. And that’s not to mention the live crowd in Las Vegas who will be cheering her on from the Allegiant Stadium after a year of pandemic-enforced shows in an empty arena.

“We’re so excited to be with our fans again and in front of a live crowd,” Nikki added. “The energy is excellent. WWE was on channel 4 when I first watched it from home and it’d be on at 1am so you were staying up. What I’m really excited about with SummerSlam, though, is that it’s a Saturday night this year.

“Yes it will start late but you can treat yourself to a lie-in or you can go watch it with friends. For me I’d stay up all night and try to go to work the next day or uni, and it speaks to the passion of our fans and why we love them so much. Representing Scotland and flying that flag is a huge honour and responsibility, and I want to make Scotland proud.”

She has done that, so far. But she’s not the only Scottish representative on WWE TV. Drew McIntyre is on the men’s roster and the Ayrshireman has been on a tear for the past 18 months.

Nikki and McIntyre are old pals and used to work together at Glasgow’s promotion Insane Championship Wrestling (ICW). And the leader of the women’s division has been inspired by her mate to do big things of her own.

“Drew has been such an inspiration in how he carries himself and he’s so professional,” she said. “His work-ethic is unbelievable and he has so much passion for this. For me he laid the blueprint for this and he carved that path. Now I’m able to carve my own path as well and I’m so inspired by him. I can’t be happier for him and when he won the Championship I was so happy for him.”

Be the first to comment on "Nikki ASH on SummerSlam 2021, flying Scotland flag in WWE and RAW Women’s Championship reign"