THERE can be no greater tribute to a young music fan than having some of the biggest acts in Scotland unite for a gig in their memory.

Tragic Sam Hannah was just 14 when he lost his battle with leukaemia in July.

The youngster was a greater lover of music along with his older brother Liam, who set up the Get Oan Wae It Podcast earlier this year.

Liam, from Glasgow, was determined to do something for Sam after his passing – and started to bat around some ideas.

He thought of incorporating a tribute into his own work before he was struck by the notion of organising a fundraising live-stream for the Teenage Cancer Trust.

And a few days later, following a determined Twitter campaign, he managed to get Lewis Capaldi on board.

Liam told The Weekender: “It was always in the back of mind to do something for Sam – to have something to dedicate to him.

“At first, it was just going to be something at the end of a podcast, but I don’t think that would do him justice. I had a few ideas, but I landed on doing a live-stream festival on YouTube.

“I think he would like it,” he added. “We always spoke about taking him to something like TRNSMT if he got well enough, but we didn’t get the chance.”

Liam, 19, went to work and sounded the rallying call to the Scottish music scene.

At first, he wasn’t sure what kind of response he would receive, but the support came flooding in.

Before long he was able to announce a line-up of talent that would rival any festival day across the country.

Liam recalled: “I always wanted to get Lewis Capaldi involved and we got a few people to tweet him. Then one night, I was at my pal’s and got a message from him at around 12.30am – there was a buzz about the gaff.”

Each band will play a short setlist but will also include a cover of one of Sam’s favourite songs.

Liam continued: “Sam liked a lot of the bands – The Snuts and Dictator – and I can’t thank the artists enough, every one of them, for taking the time to do this.

“I know there is a lot going on with the pandemic, but I’m hoping folk will be able to grab a drink and just enjoy the music as well.

“No one has really been hearing love music through all this – so maybe it can give people a bit of a pick-me-up.

“I got a message from the Garden Sessions and they offered recording time for some of the acts – it’s brilliant to see so many people getting involved; offering their hand to help the cause.”

Not content with simply organising a tribute to his little brother, Liam was adamant that he could help give back to those who were there for him and his family through Sam’s illness.

Liam said: “It’s all in aid of Teenage Cancer Trust; they were amazing to us, and we can’t thank them enough for all they did through out Sam’s journey.

“They were always offering a helping hand and were always talking to Sam in hospital. They are a magnificent charity.

Sam’s Night will stream from 5pm on Friday, October 9, via the Get Oan Wae It podcast YouTube channel.

Donations to the Teenage Chancer Trust can be made by visiting https://www.justgiving.com/fundraising/liam-hannah 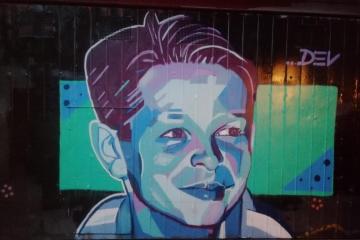