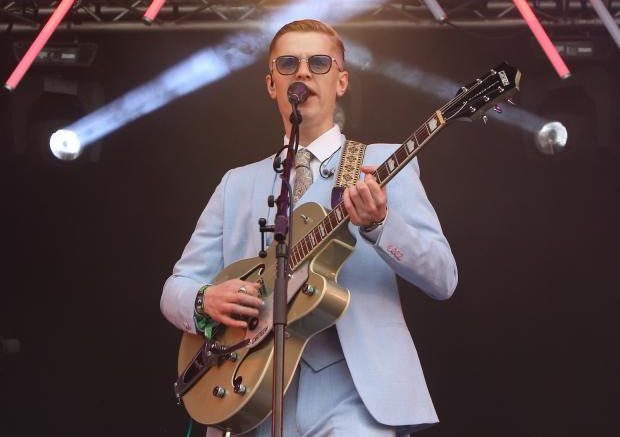 Singer Luke LaVolpe has revealed that he was following in the footsteps of his late papa by performing at TRNSMT in Glasgow Green.

While the city festival was not around during his papa’s era as a singer, he did play in brass bands in the park.

Luke, who wowed the audience at the King Tuts stage on Friday, dedicated his new song Live It to his papa who he said taught him how to sing.

The rising star, from Bathgate, got emotional during the number telling the audience he lost his papa recently.

Luke said: “My papa was a singer in the military.

“He played in brass bands and in the tattoo, he taught me how to sing when I was a wee boy.

“Last year he passed away after having Alzheimer’s for quite a long time.

“I used to sit with him and play records. Chat to him and I would write down all the stuff he was saying to me like life advice.

“I then took a voice note of him talking to me and all the lyrics in the song are his words that I have turned into song.

“I managed to at the end of the song play a clip of him talking to me about playing at Glasgow Green. He used to play in brass bands in Glasgow Green so it is full circle for me to play TRNSMT with my papa there. I am following in his footsteps.”

His papa might have set the foundation for Luke to sing the way he does but this is one artist who looks like he is on the verge of superstardom in a similar vein to childhood friend Lewis Capaldi.

Armed with a voice full of soul and a back catalogue that includes the ballad Terribly Beautiful which has the potential to be a smash hit, Luke is already thinking beyond the musical festival.

He announced a new show at SWG3 in the West End on December 6 and his new EP will be out tomorrow.

“My EP is out on July 15 and I am now starting to work on the next (thing). I am always thinking ahead of the game.

“I’ve got new songs, I hope everyone enjoys them.

“I am thinking already about the next thing, hopefully an album. It will be a lot of work but that is my job,” he said.

The teaser of working with Iain Archer is bound to interest fans. He co-wrote James Bay’s charttopper Hold Back the River and has a writing credit on one of Snow Patrol’s biggest hits Run which was later covered by singer Leona Lewis.

Collaboration is something Luke knows well with his track Terribly Beautiful co-written by The View’s Kyle Falconer, and it was this very song that received the biggest reception at TRNSMT.

“Terribly Beautiful is our biggest song. At the end of the gig I thought I will chance it and see if anyone knows the words.

“That was special to me. We haven’t really gigged that much because we have not had the chance to but I think we made a statement that we are here to be part of this every year,” he said.

He will certainly be welcomed back with open arms if he returns to the festival especially by the Glasgow crowd when they hear about his love of the city.

“I used to live here actually,” he said with a smile.

He added: “I lived here for two years when I was 19. I used to live on Daisy Street in the Southside. It’s such a nice name Daisy Street.

“The boy in my band Kieran is from Glasgow.

“We are right in the middle. I love Glasgow so much more than I love Edinburgh.

Class is something that Luke certainly brings to gigs with his trademark suit. He has an air of old school mixed with the modern, something he puts into words beautifully himself when encouraging fans to come out and see him later this year, “If you want to see a wee blond skinny guy who sings like Frank Sinatra mixed with Led Zepplin, come along.”