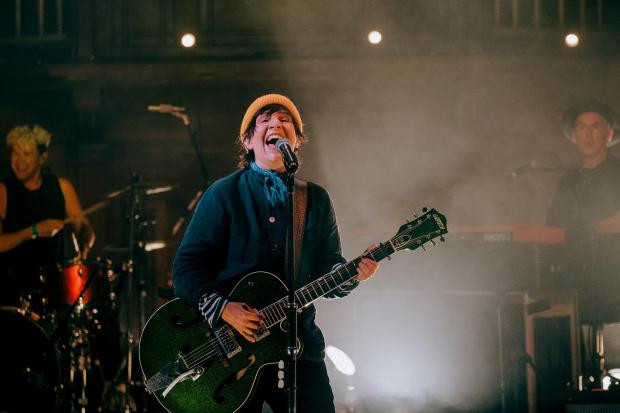 TEXAS songstress Sharleen Spiteri admitted she was on her best behaviour to ensure she stuck to covid regulations after playing one of the first gigs in the city for more than a year.

The Glaswegian star performed an intimate show with just 30 people in attendance at St Luke’s in the city’s East End on Thursday night to mark the comeback of live gigs for BBC Radio 2 – but she battled with regulations preventing the audience from standing.

She said: “I thought the audience were absolutely amazing on Thursday night. I loved looking out at them.

“We do need to look after each other. We do need to remain safe. I’m still putting my mask on all the time whenever I am out at the shop or anything like that.

“It is just a respect for each other more than anything else.”

The 53-year-old, who grew up in the city before relocating to London, left fans with a show they will never forget during the event which is part of a series being held across the country by the radio station.

The big appeal, however, for her taking part in the show was the chance to ‘head up the road’.

She beamed: “It was emotional to be home because I haven’t been allowed back for such a long time.

“I still refer to it as going up the road. I don’t think anyone from Glasgow ever loses that.

“I have just become a great aunt a year ago. I have not had a lot of time with my great nephew Sonny and I actually get to have that time with him now, the first boy in the family.”

After impressing their home crowd with a set that included a duet with Altered Images star Clare Grogan, Texas will next be eyeing up shows at Oran Mor on September 7 and the Hydro on March 4 next year.

But it seems St Luke’s has left an impression on them as Sharleen explained: “It is absolutely beautiful, isn’t it?

“It has such a beautiful warm sound, the venue was great.

“It just felt like there was so much goodwill and love in the room. It felt really positive.”

The show took place in line with Covid restrictions.

The performances will be available to watch on BBC iPlayer and BBC Sounds from Saturday, September 11, with a special highlights show on Radio 2 from 7 to 9pm on Sunday, September 12.

Live shows including Steps in Manchester on August 10, Manic Street Preachers in Cardiff on August 12 and Westlife in Belfast on August 26 are also coming up.