UNION Street businesses are warning over a massive spike in crime since lockdown, with one store the victim of a £40,000 robbery.

Business owners are claiming drug dealing and drug use on the street has also become prevalent as they reveal staff and customers reportedly fear for their safety.

One business owner, who spoke on the condition of anonymity, said: “The spike in crime is huge. My shop has been robbed three times since May. If you walk on Union Street you can’t be safe. You don’t know when somebody will smash a bottle over your head. None of us on Union Street feel safe.

“We have to leave with three of us together in case we get jumped. It’s unprecedented. I’ve been on Union Street for the past ten years and I’ve never seen it like this in my life.

“We are talking about tens of them fighting with each other and intimidating the passers-by. Even yesterday the cops had to come out with big vans at least three times.

“One time our shop got robbed they broke the shutters of the shop with a crowbar. They were dancing inside and nicking as much as they could.

“It happened again with my second shop. They stole about £40,000 worth of stock.”

The thieves phoned the business owner on his other number not knowing it was the man they stole from.

The business owner claims he asked the police to escort him to get his stolen stock back from the thieves but they refused.

“It’s not only us. Half of the shops are not even prosecuting just in case they come back out and start burning their shops down. People are quiet. They’re all scared,” he continued.

“But they’ve taken everything I got so what are they going to take from me now? Some shelves? They even broke in a third time when I had nothing left. They took everything we had – and the council have given us no grants, no help. The insurance company, no help.

“We are nearly bankrupt because we don’t have anything at all and the landlords are trying to get us evicted.” 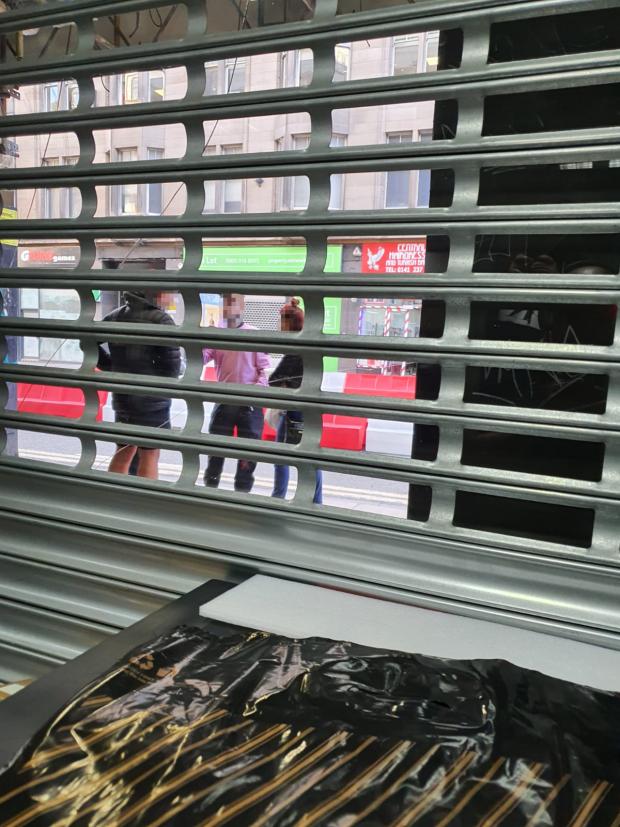 A manager of another shop on the street, who asked not to be named, said: “When we reopened there was a heavy uptick in shoplifting and reports that people were planning on coming in to shoplift.

“I believe that is the case that the spike in crime is related to the housing of people nearby. I also believe there has been a lack of active policing on the street until recently.”

Both shopkeepers believe that the spike in crime may be related to the housing of nearby people.

However, police have not confirmed whether anyone who has been charged with crimes on the street were those in nearby hotels.

He continued: “We have had shoplifters in. We sell unique items and I have seen people who have not been customers wearing said items on the street. It has obviously been stolen from here and we’ve discovered discarded tags in the store.

“I would like to see, especially in the city centre in this area, more police cars sat in the area with police ready to come to our attention and more on-foot patrols.

“Phoning during an incident is very difficult to do but if someone was to walk by and I could flag them that would be a lot easier for us.

“People have been getting put off from going into various businesses because on this street the doors tend to be recessed and people congregate in those areas and block the entrances.

“I’ve heard the local Japanese eatery had issues with people congregating and giving them issues.

“I’ve had customers tell us they haven’t felt very safe and I’ve put on additional staff because it isn’t safe in-store to run it on the normal levels which we would do.”

The Glasgow Times approached several other shops on the street who confirmed they had seen a noticeable rise in crime since reopening.

The Glasgow Times understands Police Scotland arrested and charged a 47-year-old man in connection with a break-in to a business premises on Union Street at around 7.55am on Friday, May 29.

Police are still trying to trace two other men who were involved in the incident and anyone with any information has been asked to contact Police Scotland on 101 quoting incident number 0811.