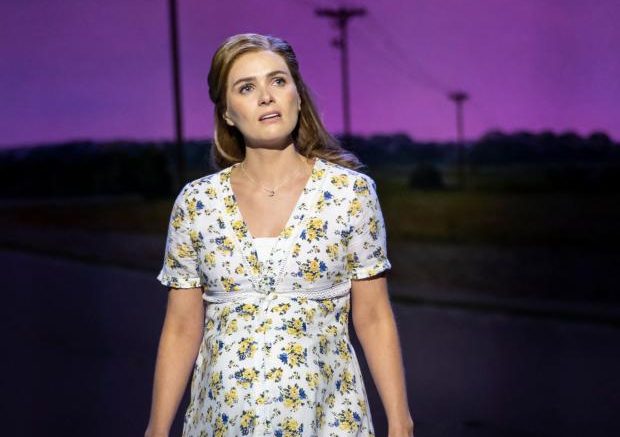 WHAT’S a recipe that’s guaranteed to cheer you up on a damp, April evening? One part uplifting tunes; mix in some sisterhood and two sassy pals; a pinch of handsome male lead; a much-needed injection of humour and you have yourself a hit stage musical.

It tells the story of Jenna Hunterson (Chelsea Halfpenny), a talented baker who has a special skill in making “ungodly” pies with unique names that highlight her feelings at key points throughout the show.

She longs to escape from her boorish and abusive husband, Earl (played by Tamlyn Henderson) and an advertisement for a pie contest in a local newspaper is her way out. Jenna finds herself pregnant.

It is through her pregancy she meets Dr Jim Pomatter (played by Matt Willis) and they begin an illicit affair.

The cast of the production was outstanding. Chelsea Halfpenny’s vocals were flawless and her Southern American accent was very convincing. Flanked by fellow waitresses Dawn and Becky (Evelyn Hoskins and Sandra Marvin) the trio proved undoubtedly that this was a musical about the sisterhood.

And of course, Matt Willis as Dr Jim Pomatter was a far cry from his days as part of pop-punk band, Busted. He was excellent as the shy and awkward gynaecologist who falls in love with heroine Jenna.

The audience was not supposed to cheer on Dr Pomatter – he is married – but Matt’s skill in playing him won us over and you find yourself rooting for them both to get together in the end.

The definite highlight was Chelsea Halfpenny’s moving rendition of She Used to Be Mine. Her skill made you feel like you were the only person in the room with her and it would be surprising if there was a dry eye in the house afterwards.

Even if you are not familiar with the music, the show is worth going to see. You will laugh, cry and cringe to this pie-tastic emotional rollercoaster.

While the show tackled some serious issues, there were some genuinely laugh out loud moments and a cheeky reference to Glasgow, which is always a crowd-pleaser.

Be the first to comment on "Waitress Review: Perfect recipe to cheer us up on a rainy Glasgow evening"