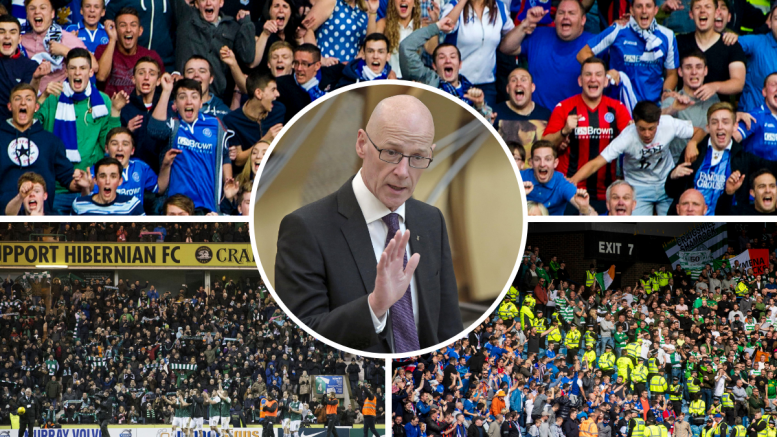 Yesterday Nicola Sturgeon outlined a list of new restrictions which are set to come into force from December 26, and one of those new rules is that outdoor events will have a limited capacity of 500 people allowed to attend.

The Scottish Government have also asked people to limit social interaction throughout the festive and New Year period with many Hogmanay festivals, including Edinburgh, already cancelled.

The decision for limited crowd capacity effectively means that many football matches in Scotland from Boxing Day onwards will be spectator free.

However, with restrictions not coming into place for another week, there are still three football matches set to go ahead tonight with potential sell-out crowds. Radio reports this morning suggested that football supporters were even rushing out to buy tickets in what will be there last chance to see their team before the end of the year.

The Deputy First Minister was speaking on BBC’s GMS this morning and he refused to express his personal opinion on whether the games should go ahead or not, instead saying it was ‘up to the football authorities to decide that’.

However, he did say that the guidance is to limit social interaction and going to the football games tonight would not do so.

He said: “Our guidance to people is basically to restrict their social interaction – to stay at home more than they would do so.

“I would encourage people to do exactly that.

“There are clearly dangers of people travelling to football matches, because they’re going to be going on to multiple forms of transport, they will be car-sharing, they may well be using supporters’ buses and all the rest of it.

“These are opportunities for the virus to spread and we know that the Omicron variant spreads much more aggressively than is the case (with other variants).

“If people want to protect their community, then I would encourage them to follow the guidance that we have set, which is to stay at home and restrict their social interaction.”

After yesterday’s announcement, clubs from Scotland’s top flight rushed to let their feelings on the matter be known, with some calling for the winter break to be brought forward to allow for a chance of full-house crowds in January 2022.

St Johnstone has requested that the SPFL bring forward the scheduled winter break and reschedule the affected fixtures.

Due to the government announcement yesterday, we believe this is the best solution for our football club and our supporters🔵⚪

He told Planet Radio: “”Why would you say this rule is really important in four days, three days time, but not tomorrow night?

Along with a maximum of 500 people for outdoor events, from Boxing Day the new curbs also limit the number of people allowed at indoor events to 100 for standing and 200 for seated, table service only will return in hospitality.

Mr Swinney said the funding – which will be added to £175 million of UK Government cash – will result in some other Government plans being slowed down.

He said: “We’re basically going to be putting pressure on different parts of government to identify underspends, to slow up programmes – so there will be an effect on other areas of policy – but it is necessary to make sure we can put some support in place to assist the business community.”

He went on to say a final decision on where the funding is coming from has not yet been identified.

The Scottish Government will, the Deputy First Minister went on to say, consider a move to reduce the period of self-isolation to seven days, as is the case south of the border.

But he added: “What we have to recognise is that the number of cases is likely to become so significant, it’s already much more significant, we’re already looking at around 5,500 cases a day compared to about 3,500 a day which was just a week ago.

“That’s going to give rise to significant absence levels in our public and private sectors and that brings into question the sustainability of some of these services – which is why we have to act to try to slow down the circulation of the virus.”

St Mirren are due to take on Celtic on Wednesday evening, while Hibernian face Aberdeen and St Johnstone take on Ross County.

Be the first to comment on "Covid: John Swinney urges fans to avoid SPFL games tonight"