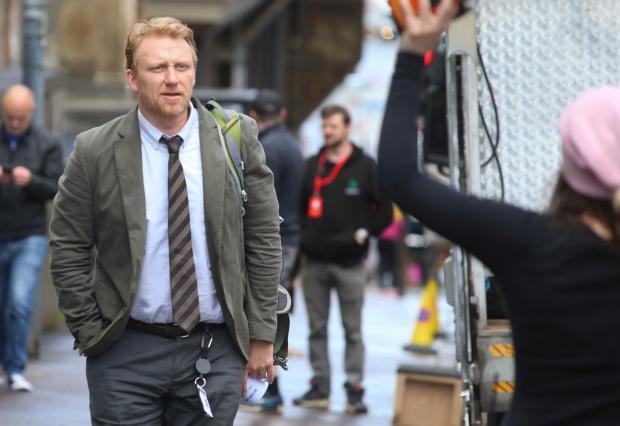 A NEW crime drama is coming to our screens very soon, and viewers will recognise the city in which some of the scenes have been filmed.

Six Four, an ITV four-part crime thriller, has been filming in Glasgow as it will be primarily set in the city.

Previously believed to have been called The Elect, Trainspotting star Kevin McKidd has been spotted filming the series in St Vincent Street.

Here is everything you need to know about the upcoming release.

Inspired by the best-selling novel of the same by Hideo Yokoyama, Six Four is described as a dark and compelling story of kidnap, corruption and betrayal.

When police detective Chris’ teenage daughter goes missing, he makes a startling revelation about an infamous, unsolved case of a local girl who also disappeared.

READ MORE: Production continues on The Elect as stars film at The State Bar in Glasgow

Chris uncovers errors and corruption in the cold case, while his wife Michelle, a former undercover officer, follows a trail of clues into the criminal underworld she previously escaped from.

As the desperate couple search for the truth, a third girl goes missing. The daughter of the Justice Minister is suddenly kidnapped, just as the minister is on the cusp of achieving a political election victory…

McKidd stars as Chris in the lead role, while Sherlock’s Vinette Robinson joins him as his wife Michelle in the drama created by BAFTA-winning screenwriter Gregory Burke.

The Grey’s Anatomy star spoke of his delight to return to his home country to work on the project.

He said: “I never take for granted the privilege of being an actor and the chance to become characters like Chris O’Neill, a hard-working serving police officer, whose teenage daughter has gone missing in Six Four.

“Greg Burke’s scripts are real page-turners, as he keeps you guessing with every plot twist and turn.

“I’m delighted to be returning to my native Scotland and to be partnering Vinette Robinson as my on-screen wife, Michelle, and to be working with House Productions and ITV on what promises to be a compelling thriller.”

Richard Coyle, who starred in Fantastic Beasts: The Secrets of Dumbledore, will also appear in the series.

Gregory Burke added: “I’m so excited to bring Six Four to the screen with the wonderful combination of House Productions, ITV and BBC Studios.

“At its heart, Six Four is a human story about two people under incredible amounts of pressure, who both choose to try and address their pasts.

“It is a story about how chance can define a lifetime, exploring the corruption that runs through institutions, and examining the secrets and monsters that lurk in every family.”

Six Four will be streamed for free on ITV’s new service ITVX in 2023, before being shown on ITV months later.