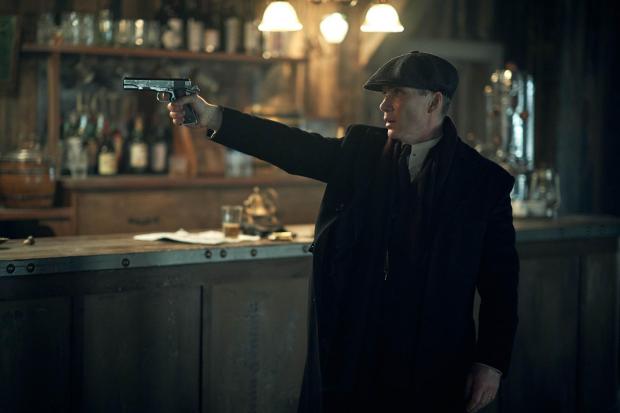 If Peaky Blinders had to be summarised in a single word, that word would be “chaotic” – or so says actress Sophie Rundle.

A reflection that comes ahead of the launch of the sixth and final series of the Bafta-award-winning BBC crime drama, the 34-year-old, who plays Shelby sibling Ada Thorne in the show, stifles a laugh as she’s presented with some of the more obscure internet hearsay linked to the forthcoming series.

“Mr Bean in the Peaky Blinders world? I mean, that’s a cameo I think we all want to see,” declares Rundle, referencing one notable rumour from late 2020 which saw Rowan Atkinson purportedly entering the show as Adolf Hitler.

Speculation that caused a fan furore across social media, the whispers resulted in a rapid and categorical denial from a Peaky Blinders’ spokesperson. It is one example of the Peaky fanbase’s appetite for new material. And now, nearly two and a half years since the last series aired, the show’s loyal army of followers are once again chomping at the bit ahead of the sixth and final instalment.

“By virtue of the Instagram algorithm, I sometimes see the fan art and content people have generated off the back of watching the show – that’s just my favourite thing about being part of Peaky Blinders,” says Rundle. “This work generates new work and enjoyment and pleasure. People really do love this world – and that inspires them to generate their own content off the back of it and I love that.”

Our chat comes as the show’s creator, Steven Knight, unveiled a striking 42-foot high mural of the series’ gang leader, Tommy Shelby, on the side of the Old Crown pub in Digbeth, Birmingham. Formerly an industrial neighbourhood where the term “Peaky Blinder” was first coined, the show is loosely based on a gang of the same name who were active in the city for about two decades during the late 19th and early 20th century.

“It’s been an amazing journey,” says Knight, speaking from beneath the mural. “The thing has snowballed and, even now, more and more people are discovering it, which is the great thing about streaming – it doesn’t have its day and disappear.”

And disappear it will not, as the Shelby’s are set to make their stage debut as part of the upcoming stage adaptation, Peaky Blinders: The Redemption of Thomas Shelby. Not only that, but Knight has previously noted his desire to transfer the Peaky Blinders’ tale onto the big screen. “Peaky – in this incarnation – comes to an end,” says Knight, “but we’re doing a film which will also carry on the family and the stories into the Second World War.”

As optimistic as the show’s creator is when it comes to the future of Peaky Blinders, the final series is accompanied by a distinct and undeniably sombre undertone. Describing the “challenge” of continuing the Peaky Blinders’ story following the death of actress Helen McCrory during shooting, the writer says he “knew that she would have wanted [it] to continue”.

McCrory, who played Shelby family matriarch Polly Gray in the hit BBC One show, died from cancer last April, aged 52. Starring in the Harry Potter franchise and wife of Homeland actor, Damien Lewis, McCrory was “right at the heart” of the Peaky Blinders tale according to Knight. “There are three central characters – she was one of them.”

It’s a sentiment shared by fellow actor, Cillian Murphy, in a recent interview with Variety, as he described the cast and crew’s “determination” to make this a “special series”. Going on to note the way in which series six “simply won’t be the same” without the actress, Murphy describes McCrory’s passing as an “enormous loss to the whole acting community.”

“I think the whole series is really in tribute to her and to honour her,” says Murphy. “Her presence and her character’s presence are very much still felt in the series, and it is very much part of Tommy’s journey in the season.”

Describing McCrory as a “fundamental” part of the show, co-star Rundle, who plays McCrory’s on-screen niece, says returning to set without the actress was a “baffling” experience. Leaving a maternal hole both on-screen and off, the actress says the cast and crew have ensured she has “remained an enormously integral part of the show, even in absence”.

A character who has constantly strived to distance herself from her family’s unsavoury reputation over the past decade, Ada Thorne (nee Shelby) can be found taking the reins from her late aunt Polly this time around. A move “born out of necessity” according to Rundle, Ada’s attempts to emulate her aunt’s firm hand in dealing with the Shelby clan’s unruly behaviour comes as a result of needing to “fill the gap”.

“She was a kid when we started series one, but I think that when you grow up, you kind of re-meet your parents,” says the actress. “You have to form a new relationship as two adults in a room, rather than just the kid and the parental figure, and she does that with Polly. She’s a mother, she’s been through her own journey, and then in Polly’s absence, I think she takes on a lot of her characteristics because actually she realises how much he admired them.”

A series that’s also set to star Line Of Duty actor, Stephen Graham, Knight described the Liverpudlian star as one of the show’s shining lights, adding: “I really wanted to use him as a character and there was a particular Scouse character that becomes part of the story – and who else would you cast?”

As for the lasting legacy of Peaky Blinders, Rundle says part of the show’s appeal remains its ability to highlight the grittier side of history.

“It’s not all just tea parties and corsets,” says the actress, reflecting on the working class narrative Peaky Blinders is built upon. “It’s just people, you know? It’s fun, and you can have fun with it – and that’s what Peaky has always done.”