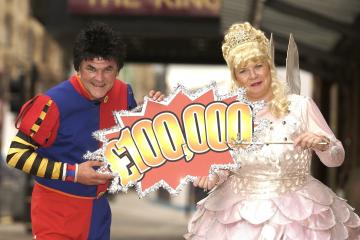 FOR a generation of Glasgow panto-goers, one man and his wonky wig sums up the festive season.

Gerard Kelly was a King’s Theatre Christmas show legend, who brightened up the winter months with his quick wit, daft jokes and colourful characters in a string of seasonal shows.

As panto season gets underway in earnest, Times Past took a stroll through our picture archives and found a few gems of the star in action.

Kelly, as he was known, was a professional, who reigned supreme at the King’s for more than two decades, whether losing out in love (again) in Cinderella as poor Buttons, or wiping up after Widow Twankey as Wishee Washee in Aladdin.

He had many strings to his bow, of course, with a string of successful acting roles under his belt.

Born and brought up in Cranhill in Glasgow’s east end, he fell in love with acting at school, and along with roles in adverts and TV dramas, he played a teenager with learning difficulties in Donal and Sally, a Play for Today in 1978 on BBC ONE.

He appeared as designer Spanky Farrell in the Play for Today adaptation of The Slab Boys in 1979 and returned to the role at the Traverse in 1982 in a production at the Royal Court in London and was a major success.

He is most famous for his roles as Willie Melvin, a bank worker who wanted to be a writer, in the TV comedy City Lights and villain Jimmy in EastEnders. He also played gangster Callum Finnegan in Brookside from 1997 to 2000 and camp panto director Bunny Bunton in Extras in 2005.

Kelly also helped to run 7:84 theatre company with David Hayman for three years in the late 80s. In February 1993, he joined with Hayman and Andy Gray for a Rain Dog production at Glasgow’s Arches Theatre of Still Life, part of John Byrne’s Slab Boys trilogy.

He had been due to revive his role as the narrator in The Rocky Horror Show at the King’s in Glasgow when he died in 2010, from a brain aneurysm.

From soap villain to camp comedy star, Kelly was a Glasgow legend. For many, he will always be the hilarious sidekick to a string of panto dames, striding on stage in his trademark Doc Martens, shouting ‘hiya pals’ at the top of his voice as he chucks sweeties into the audience with the aid of a well-placed tennis racquet.