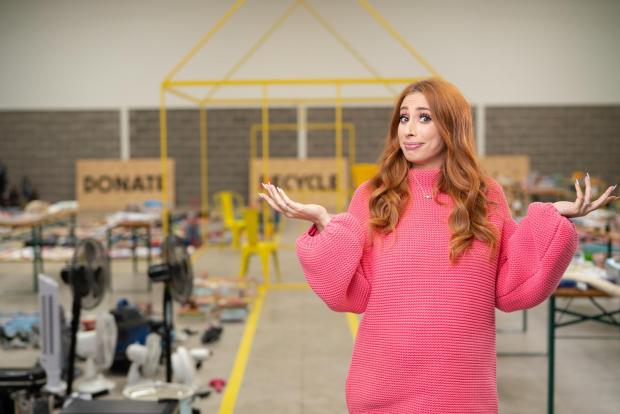 One of the most likeable famous faces, Stacey Solomon has bagged her own TV show, Sort Your Life Out. Georgia Humphreys discovers the idea behind it.

From the moment she bounds into the room grinning, one thing is clear: Stacey Solomon is just as bubbly and giggly in real life as she comes across on Instagram.

The 32-year-old TV personality, who hails from Dagenham, east London, has made a name for herself on the social media site in recent years, and currently has 4.8 million followers.

It’s all thanks to sharing her organisation tips, storage hacks – how to neatly hang crisps up in the cupboard, for example – and upcycling projects, as well as candid posts and stories about family life.

And so it makes sense that the latest project for the Loose Women panellist – who rose to fame after finishing in third place on the sixth series of The X Factor in 2009 – is hosting a six-part BBC series called Sort Your Life Out with Stacey Solomon.

The show, which first aired as a one-off pilot, sees the mum-of-four, plus a group of experts – organiser extraordinaire Dilly Carter, carpenter and upcycler Robert Bent, and cleaning fanatic Iwan Carrington – travelling around the UK, and coaching various families as they declutter their homes.

The first step is to take out all the home-owners’ possessions – from the everyday to the nostalgic – and lay them out in a giant warehouse, which is quite an incredible sight to behold.

In the meantime, the team will be reorganising and cleaning the family’s home, so they can return to a brand-new, beautiful, tidy space.

“Every time we go into the finished house, I get really anxious because they might not be happy – and that is a massive possibility,” confides Solomon, who’s engaged to former EastEnders star Joe Swash, while on set in August.

“I’ll get a dry mouth, and just think, ‘Oh my god, imagine if they hated it or they just felt lost’.”

But the affable star, who was pregnant while filming (she gave birth to daughter Rose earlier this month), says she tried really hard not to get too emotional on shoots “because otherwise I think I’d just cry the whole time”.

“People are holding on to things for so many reasons that actually parallel different moments in your own life that you can relate to.

“We did a show with a single mum who split up with her husband, looks after her daughters, and there was so much she was holding on to just because she preferred who she was when she was in a relationship.”

She follows: “The last house we did, the lady had an accident, really hurt her back, and has been unable to get back to her normal life ever since. She really wasn’t happy with the way that she looked and she never addressed her wardrobe because of that. She never looks at her clothes, wears the same T-shirt every day.

“That was really, really sad because going through the wardrobe section was heartbreaking for her. It reminded her of a time before she had the accident, which I don’t think she’s accepted or feels that she wants to move on from because then she has to let go of that person.”

If it seems like one of the contributors is struggling mentally, it’s made clear that there’s more help available to them, Solomon adds.

“I’m not qualified; I can give a really good cuddle, but outside of that there does need to be professionals that step in and say ‘Hi, we think you need a bit more back-up than that’, and that is what they do,” she explains. “The BBC has been really good at that.”

Of her own role on the programme, she continues thoughtfully: “I don’t want to say the wrong thing. I don’t ever want to make anyone feel like I can fix those problems, because I can’t; I can do my best to try and make people feel better and more comfortable about letting go of stuff, but I’m not a counsellor.”

When it comes to the families featured in the show, they haven’t gone looking for people who are in desperate situations, Solomon notes; this is not an “extreme hoarders sort of show”.

“When people get to a situation of not being able to move in their own home, I can’t come in and sort your life out. That’s a whole other show in itself. You need much more help than Stacey Solomon hanging crisps up.”

It’s fascinating watching this show and seeing such a random collection of items that people hold on to for years and years. What’s the worst thing the presenter has come across while making the series?

“I think the worst things are really sweet! We’ll go into the house and have a look before anything comes out and goes to the warehouse, and I’ll pick things up like a kid’s ponytail and I think, ‘Oh that’s so sweet’. I would keep that.

“We’ve found umbilical cords. From my motherhood experience, I find all these things really normal and exciting and sentimental. The rest of the team is like, ‘That is gross’.”

Solomon has a bustling home in Essex, named Pickle Cottage; as well as new addition Rose, she and Swash are also parents to two-year-old Rex, while she has two sons, 13-year-old Zachary and Leighton, nine, from previous relationships, and is also step-mum to Swash’s teenage son, Harry.

So, do her older kids and Swash get involved with the sorting at home?

“Joe is an absolute tornado of a person and I think that’s why we ended up coexisting together,” she quips. “We are polar opposite.

“I have one child who is exactly like me… does his own room immaculately, gets himself ready every morning. My eldest is the complete opposite. He’s a slob and would live in his own filth for weeks if I let him. I have to genuinely beg him to shower. I’m like, ‘Please! you are 13, this is not the way to go’. Never organises his stuff and never makes his bed. But they’re both happy.”