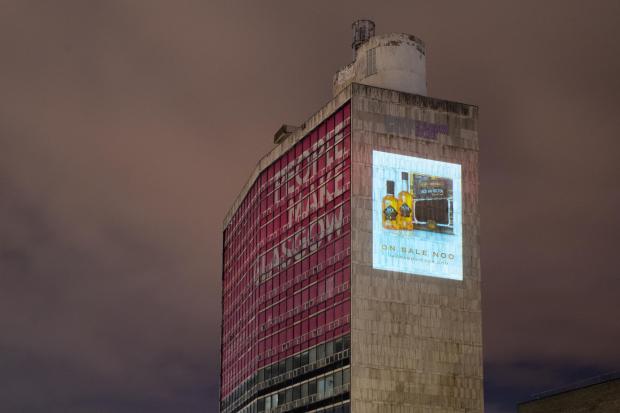 SOME of Glasgow’s landmarks were lit up last night as projections of Jack and Victor Whisky appeared across the city.

The stunt was to celebrate the release of the limited edition gift-pack which went on sale this week, with images shone onto the People Make Glasgow Building, the People’s Palace, and around the Barras.

The image was also shone onto Collina Street tower in Maryhill, which Still Games fans will know as Jack and Victor’s home, Osprey Heights.

An advert for the gift pack premiered on Wednesday which saw the beloved characters return to TV screens for the first time in three years.

Ford Kiernan, the co-creator of Still Game who played Jack Jarvis Esq, said: “We did say to keep your eyes peeled for what we had planned with Jack and Victory Whisky this week.

“I bet the boys would have loved seeing their names up in lights.”

Greg Hemphill, the co-creator of Still Game who played Victor McDade, added: “We knew this would be good fun projecting images across the city, and there was no doubt in our minds and that we had to take Jack and Victor home to Osprey Heights as one of the landmarks.

“Mind you, thank god Isa’s no longer there or we’d have been stuck there all night with her gabbin’ away.”