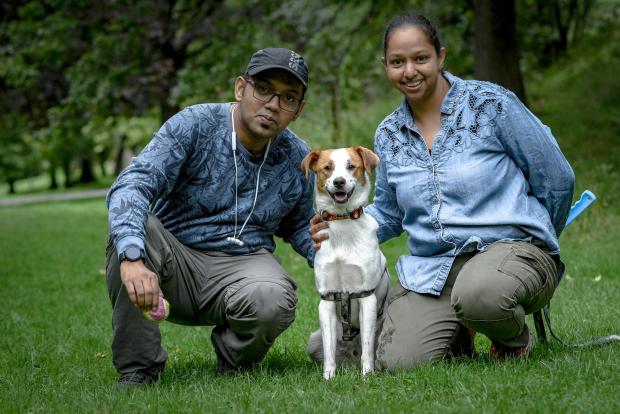 A CHEEKY Glasgow pooch is set to win audiences’ hearts over when he competes for the title of Scotland’s Best Dog.

Mixed breed Picco will bounce onto our screens – quite literally – with his energy this Thursday when the first episode of the new BBC Scotland series airs.

Hailing from the city’s West End, Picco – who has been pinned by a vet as somewhere between a Jack Russell Terrier and a Whippet – was adopted when he was just four months old by owner Shiny Sood and her husband Gaurav Srivastava.

Now at 13 months old, the rescue dog will be tested on a number of challenges before a panel of judges including dog lover Kaye Adams, animal behaviourist River McDonald, and Scottish SPCA veteran and dog trainer Alan Grant – to prove that he is Scotland’s Best Dog.

“He has a lot of potential,” said Shiny when asked if Picco could walk away with the coveted best title.

The 37-year-old, who is originally from India, added: “He is very naughty and very sensitive at the same time.

“The one thing I adore about him is in the mornings when you wake up, he just comes to the bed and puts his head down on your chest.

“That is his morning ritual everyday. He has been doing that since he was a baby. That is the only time I catch him being so calm and loving.”

Shiny applied for the show after an advert on social media captured her attention and since then she hasn’t looked back.

She said: “We enjoyed every moment. Everyone has been so nice and friendly. We got to know so many nice, it was an experience.

“Sometimes you watch a show, but you never understand how much work goes behind it.”

One of the people that Shiny got to meet along the way is judge Kaye Adams who needs no introduction to Scottish viewers.

Aside from being a Loose Women and BBC Radio Scotland presenter, the 58-year-old is also mad about dogs.

Mum to eight-year-old Cockapoo Bea, a judging role on Scotland’s Best Dog was perfect for Kaye who admitted she had a blast filming.

“I love the doggies,” she laughed.

She added: “I am a bit of a mad dog person myself with my own dog. Something I never thought I would be but there you go. I have fallen into that terrible doggy trap.”

For someone who has been in the world of showbiz for a long time wasn’t it a bit of a risk working with animals?

“Nobody peed up my leg,” Kaye laughed.

She added: “One of the really lovely things about the show was both River and Alan. Although they are brilliant trainers, they are just dead relaxed.

“There were a few occasions when they went a bit AWOL but nobody was screaming at them.”

With the aim of the show to find the most-cherished canine characters, does Kaye think the team achieved that?

“We had a huge range of different breeds and all of them were lovely dogs. It was a really nice reminder that you don’t have to get the perfect breed to get a lovely dog, do you know what I mean?

“It has become a bit of a designer accessory for some people. It is not really about the breed. It is about the dog and how well you look after the dog and what kind of relationship you have with the dog.

“If you do have a good relationship with your dog you will have a lovely dog regardless of the breed.”

Kaye knows that because of the relationship she has with her own dog Bea.

“We are grumpy menopausal old ladies the pair of us, so we are the perfect match,” she said with a smile.

She added: “She is just very unlike me. Very chilled and quiet. She doesn’t cause a fuss. She is just lovely, she is nice to have around.”

Having worked in TV for more than two decades, Kaye perhaps has an instinct when it comes to understanding a TV audience and for that reason, she hopes people will love Scotland’s Best Dog.

“You are always putting your neck on the line when you say this but when we were in the midst of filming in fact on the first day I absolutely thought to myself, ‘yeah I think this works and people will like this.’

“I may be way off but I have been on productions before and I thought to myself,  ‘Oh God I am really not convinced about this one.’

Catch episode one of Scotland’s Best Dog on Thursday on BBC Scotland at 8pm.